It was drizzling so I had to head back to the office. On my way to the office, I saw a brightly colored creature fly. “I’ve never seen that bird before. Now, where did it go?” I scanned the branches of the trees and looked for movement but found no such bird. Something yellow caught my eye. Flutterby, I meant, butterfly! There’s a bright yellow butterfly sipping nectar from the white flowers, I thought. Because of my height and the relative position of the lepidopteran, I can only see parts of it. The body is like that of a bumblebee, yellow with black bands. The lepidopteran is dominantly yellow. The basal part of the forewings and the hind wings are yellow with black markings. The top/ upper half of the forewings are mainly black with white  markings.

Looking closely on a photo I took, I realized that it’s not a butterfly. Check out their antennae, definitely a moth.

I was having a hard time trying to take a picture of the lep when I realized that there’s at least 3 of them. Oh, joy! Pure joy! Like most lepidopterans, they’re hyperactive, fluttering their wings forever (not!).

I find it hard to sleep whenever I discover a new organism here in MSC San Gabriel. I just have to know their name. As I have not found the time to upload the picture, it was hard to ask for help in identifying the moth.  Google it! Keywords: yellow leopard moth. Bingo!

Why did I include leopard as part of the keywords? Well, I was browsing lepidopteran photos and I saw Phalanta phalanta which has a similar print but a bit orangey. The common name of Phalanta phalanta is Common Leopard. 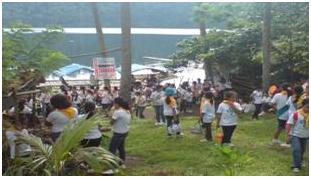