When two-year courses were offered at MSC in June of 1991, he enrolled in the Computer Technology course.  During his stay at MSC he became a computer laboratory assistant and a student assistant (stay-in maintenance staff).  As if working while studying was not enough to keep his hands full, Allan even took on the responsibility as the first Student Council president of MSC.

He maintained his diligence, hard work, and perseverance after his graduation from MSC.  Starting out as a data encoder, he became data control clerk/statistician.  After only a few months as data control clerk/statistician, Allan became computer operations supervisor and then systems supervisor.  In 2006, he was assigned as technical support specialist.

Today he is a senior technical support specialist at PAGCOR.  He even found time to continue his studies and finish the Bachelors Degree in Public Administration at University of Manila while working.

Allan keeps his connection with MSC by enrolling all his children at MSC High School.  Job Xanthe, his eldest graduated in 2011, Jay Vince graduated in 2014, and John Ezra is now in fourth year. How’s that for loyalty?  Yes, he was a loyalty awardee when he was studying, but don’t you think he deserves another loyalty award for enrolling all his children at MSC? 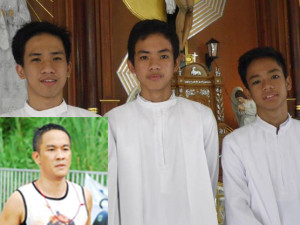 Allan (inset) and his boys

Cheers to Allan!  You are an inspiration to fellow MSC graduates! You are among MSC’s Finest!